There have been two recent incidents of this with xhire members – but according to the BBC there have been a spate of them recently.

This from BBC Investigations:

“Several thefts, over the last twelve months,  have been reported to the British Broadcasting Corporation Investigation Service (BBCIS), involving pairs on motorcycles / scooters, stealing camera equipment, either from the back of vehicles, or on the street. In all cases the BBCIS has reported the incident to Police and where possible have released CCTV footage.

I have been informed by the Metropolitan Police that this type of crime is rife across the city, involving several different teams. The police are experiencing considerable difficulty in addressing the problem as the suspect’s  features are  always obscured with full facial helmets and the bikes are invariably displaying false, or doctored registration plates. It has been intimated that the only way the  Police are likely to make an impact on this type of crime, is through intelligence from informants.

The only effective action the BBCIS can take at this time is to alert production crews out on the street, of the MO and to ask that they remain vigilant to the threat.

The officer collating these crimes in London is DC Nick Howard, of the Serious Acquisitive Crime Departmentt on 0207 321 6744.”

Video Europe lost two cameras on Friday the 7th March at the BBC and Cruet were targetted outside a production company by the same method from which these photos originate.

The driver from Cruet reports that the moped appears to have followed him around the corner into a street which is effectively a dead end.

As he pulled up, the passenger from the moped had dismounted and was opening the boot of the vehicle. He grabbed two bags from the van and jumped back onto the moped and they then rode away.

Both people on the moped were wearing black helmets and the moped was a black Paiggio Vespa with dark red seat pad and appears to be registered in Maidstone in Kent.

The likelihood is that the moped is stolen and another will be used next time – however, the driver’s clothing is more likely to be a constant feature since motorcycle gear is expensive.

The helmets appear to have tinted visors and the front rider has an expensive Rukka jacket – a relatively unusual Finnish brand with a distinctive ‘R’ on the back of the jacket and Rukka’s trademark bands on the sleeves.
The driver appears to be a little portly. 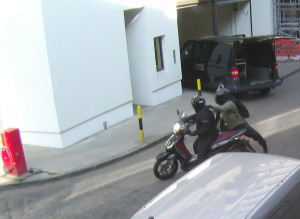 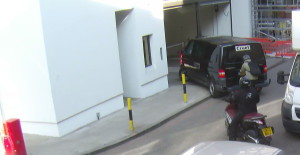 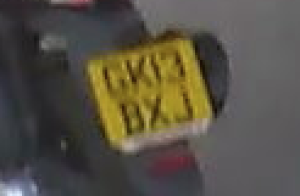 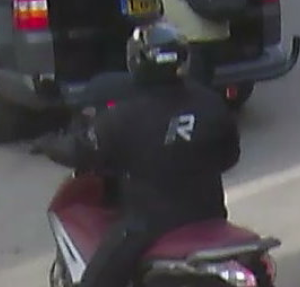