Overnight a BMW X5 was used to ram raid the shutter door of V.E.’s Soho office.

This event comes after a robbery from the back of their van on Friday 7th March outside the BBC.

The driver was sat outside the BBC when he heard the van door open, he jumped out to see 2 men making off with a C300 and PDW800, on a moped.

Serial numbers will be confirmed soon. 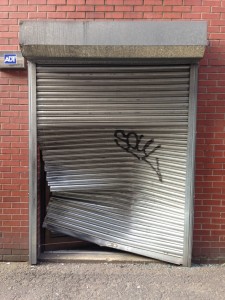 Comments Off on Attempted break in at Video Europe Soho